Why have we decided to do this? The roast chicken was easy (in comparison). I've made 1,000's of roast chickens and I really only make about 3 desserts! Pavlova (yes, I'm showing off), cheesecake (the British kind, so not that tough) and oat balls!

When we started our #worldcupcookoff competitions in 2014, I thought I had the advantage. This time I wonder if I'm ready to fight for the mixer?

It seemed a lot more feasible to combine 4 savory flavors from 4 different countries than 4 sweet flavors.

If you want to host your own #worldcupcookoff, you can download a event manual and book template that will walk you through all the part of becoming an event Tsar!

How Did It Turn Out Last Time?

I won! We used the honor system. We're using it again.

In my roast chicken dinner, the llapingachos was a surprise. It was easy to make and solved my Swiss problem! Kim's fufu was incredible, but it just didn't play as well as peanuts and eggs.

Not surprising as - That is so Guatemala! - Robin Williams, Birdcage

So this year, the person who gets Switzerland lucks out! Imagine the advantage you get from getting the world's most prolific chocolate nation! Although the Inca's first processed chocolate so that might not be a problem if you get a group with nations from the Americas.

How Does Technique Affect the Competition this Time?

I think that this year technique is really going to matter. I've cooked a lot of roast chicken dinners and it's really hard to mess it up. But dessert -- that's different. What is it like to make chocolate casing? How do I make sugar ribbons. I think this is gonna make my head spin.

And, I have seen people liquidize and drink trifle when it didn't work out. Me included. :-)

Follow along with us as we pick our groups and do our research. We'll be adding update to the blog so check back...

My Task Now! What Do They Eat in Dakar?

Another hurdle! It looks like I'll have to circumnavigate the global and combine tastes I have no idea go together.

My first impression of group H was "Geez, I have no idea what anyone eats for dessert or even dinner in most of these countries."

Senegal was the most interesting journey. The illusive Mamafou created a dessert based on French culinary techniques.

The banana 2 ways: a smoothie banana ice cream with whole bananas and toppings looks great. And, it has a French name, Banana Glace.

I'm not sure that I want to use it in my dish. How will I combine the other countries with such a lot of banana?

Rice and couscous pudding seem to be popular, but I'm not a rice pudding fan, so that probably won't happen.

Beignet! Jackpot. I love beignet and still have mix left over from New Orleans.

I've seen this Japanese dessert made on TV and thought it seemed delicious. I love cream and crepes and matcha is so Japanese. So big points including the country.

But! Apparently a flan is also a favorite Japanese dessert. I like this idea, but it does seem like cheating. Two French influences that make some of the most famous desserts in the world! Beignet and Crème Caramel.

In my journey down the rabbit hole, I discovered that Purin means slurry! Unfortunately this isn't a flattering translation of the word. And I also wondered how did this pudding reach Japan?

Will fate or google decide on this instead of me? Every time I entered Purin into the search engine, it auto-corrected to Putin.

Poland has the perfect compliment to a dessert for me: gingerbread! I love this taste and I think it'd be fantastic.

Finally, a country that likes cheese for dessert! While the Coop du Monde battle lent itself to bold flavors, the dessert challenge obscures the influence of the land and the people as desserts seems more consistent across cultures.

Now I have to work out how to represent cheese and guava in my competition dessert!

Stay tuned for the next installment... don't forget to buy the digital download today.

My First Try for a Group H World Cup Dessert!

I've added wild flowers to a beignet before. They melt and look good. I thought I'd apply this technique to guava paste. I imagine it being a melted surprise inside the beignet.

This part of the dessert helps me hit Columbia and Senegal!

Guava paste is part a traditional and beloved dessert in Columbia, and surprisingly a Christmas dessert in Goa, India. While, beignets are sold on the streets of Dakar in Senegal.

Matcha is tough! I'm not a fan of the bitter taste. When I was researching, I searched for matcha in Yummly. Lots of cakes came up, but fortuitously at the same time, I was trying to clear the cupboard of white chocolate. Voila! Matcha and white chocolate mousse.

I love mousse, it's so easy to make.

Matcha gives me Japan. I like this dessert as it seems less dull than the flan, not as complex as the crepe cake, and I can use up the white chocolate I have sitting around.

When I was tweeting, I came across a small cottage in England that sells Gingerbread Crumbs. It seems a little Hansel and Gretel, but when I thought about plating the dessert, it seemed like an easy way to add a taste of Poland.

The fact that I can't make a kebab cake is a disappointment, but there is the rest of the summer. I wonder where I can find a spit!

We finally made my dessert concept. The gingerbread cookies came out perfectly. They crumbled easily and they had that chewy, gingery nut taste everyone wants!

The combination of the beignet, the mousse, and the gingerbread crumbs is delicious.

Unfortunately the hot beignet melted the mousse and the picture doesn't look great, but it made us search for another way to present it.

Riffing on baked Alaska, the mousse is in the freezer right now and later today (or tomorrow) I'll try deep frying it in the uncooked beignet to see if it'll hold up to the heat while the beignet cooks. 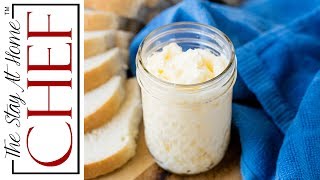